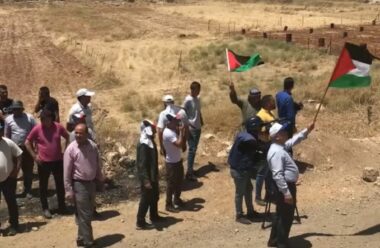 On Friday, Israeli soldiers injured many Palestinians in Beit Dajan, east of the northern West Bank city of Nablus.

Dozens of Palestinians held the weekly procession against the illegal Israeli colonialist activities on their lands while chanting for national unity and ongoing struggle until liberation and independence.

Ahmad Jibril, the head of the Emergency Department at the Nablus branch of the Palestinian Red Crescent Society (PRCS), said the soldiers shot a young man with a rubber-coated steel bullet and caused burns to another Palestinian.

He added that dozens of Palestinians suffered the effects of tear gas inhalation, cuts, and bruises before they all received the needed treatment.

Since May of last year, the Palestinians have been holding ongoing processions on their lands in Beita and Beit Dajan, including in Sbeih Mountain after a group of illegal Israeli colonizers installed an outpost atop the Mountain.

During these protests, the soldiers injured thousands of Palestinians and killed several others, including children.