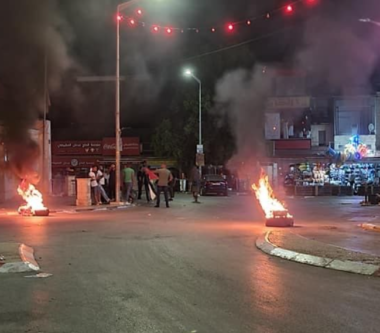 Local sources hundreds of Palestinians marched towards the northern entrance of the city, protesting the ongoing Israeli onslaught and the escalation against the Palestinian civilians in the Gaza Strip, and several parts of the West Bank, including Jerusalem.

The Palestinians marched after evening prayers from the center of the city, and headed towards the permanent Israeli military roadblock, at the southern entrance of the city.

In occupied Jerusalem, the soldiers also shot and seriously injured a Palestinian child, on Tuesday evening, in the Sheikh Jarrah neighborhood.

Eyewitnesses said the soldiers fired live fire towards the child near her home, in the area where Israel wants to illegally confiscate Palestinian homes in buildings, for its colonialist activities.

The Palestinian Red Crescent Society (PRCS) She has been identified as Sabreen al-Kiswani, 12, and described her wounds as serious-but-stable.

The PRCS added that the soldiers also injured 41 Palestinians, some with live fire in Sheikh Jarrah and Bab al-Amoud.

In addition, the Israeli soldiers shot one Palestinian in Salfit, in central West Bank, and seven in Tubas in northeastern West Bank, during ongoing protests.

Earlier Tuesday, the soldiers killed Islam Ghayyad Mohammad Zahda, a 32-year-old Palestinian former political prisoner, near the Ibrahimi Mosque in the Old City of Hebron, in the southern West Bank.