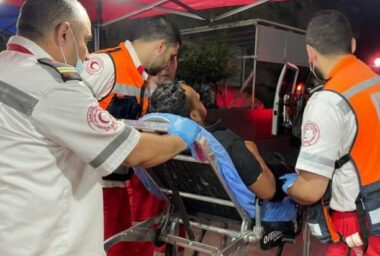 Local sources said dozens of Palestinians marched in Qarawat Bani Hassan town, west of Salfit, protesting the ongoing Israeli onslaught on Gaza and the escalation in the West Bank.

They added that the soldiers attacked the Palestinians with live fire, in addition to rubber-coated steel bullets, gas bombs, and concussion grenades at the main entrance of the town.

Medical sources have confirmed that a young man was shot with a live round in the thigh before he was rushed to a hospital in a moderate condition.

Many Palestinians were injured by rubber-coated steel bullets and the effects of tear gas inhalation.

In addition, the soldiers attacked protesters near Tayasir military roadblock, and ‘Atouf village, east of Tubas.

Ten Palestinians were shot with live ammunition in ‘Atouf, and three near Tayasir roadblock, while many others suffered the effects of tear gas inhalation, in addition to cuts and bruises.

The army also abducted three young men, after shooting them and took them to an unknown destination.