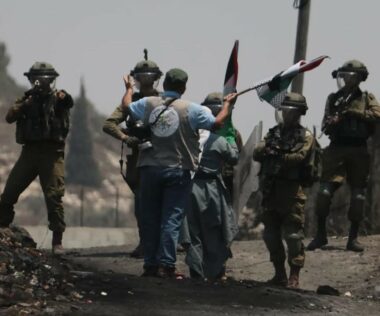 Israeli soldiers injured, Friday, many Palestinians during the weekly procession in Kufur Qaddoum town, east of the northern West Bank city of Qalqilia.

Morad Eshteiwi, the spokesperson of the Popular Committees against the Annexation Wall and colonies in Qalqilia, said dozens of soldiers invaded Kufur Qaddoum and took posts in abandoned buildings before the weekly procession started.

He added that the soldiers attacked the protesters with rubber-coated steel bullets, gas bombs, and concussion grenades, causing dozens to suffer the effects of tear gas inhalation.

The procession was attended by hundreds of Palestinians who marched carrying Palestinian flags and chanting for ending the illegal Israeli occupation and its colonialist activities, and the establishment of a contiguous Palestinian state with Jerusalem as its capital.

They also denounced the latest Israeli military escalation against the Palestinians, their homes, and lands, especially in occupied Jerusalem, Hebron, Nablus, and the Northern Plains.

In related news, the soldiers abducted Mohammad Jihad al-Aqra’, 28, from Qalqilia city, after stopping him at a sudden military roadblock while he was heading to Jenin, in northern West Bank.