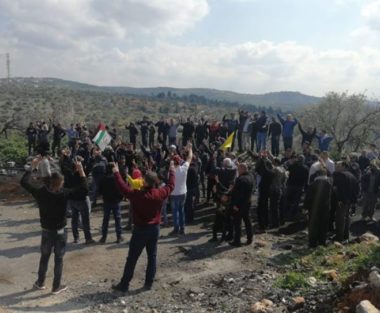 Morad Eshteiwi, the coordinator of the Popular Committee against the Annexation Wall and Colonies in Kufur Qaddoum, said the Palestinians and international peace activists marched from the local park, and headed to the nearby closed main road.

He added that the soldiers started firing rubber-coated steel bullets, gas bombs and concussion grenades, causing many to suffer the effects of teargas inhalation.

Eshteiwi also stated that the Palestinians in Kufur Qaddoum will continue their protests despite the excessive use of force by the army, and that they insist on their legitimate demand to have the main entrance of their village reopened.

It is worth mentioning that the army closed the main road more than fifteen years ago, to enable easy access to colonialist settlers, driving to and from the illegal Kedumim colony, which was built on private Palestinian lands.

Friday’s procession, which was violently attacked by the soldiers, included various peaceful activities, such as recreational activities for children provided by the Psychological Department of the Palestinian Education Ministry in Qalqilia.

Kufur Qaddoum witnesses frequent Israeli military invasion, including the violent searches of homes and property, in addition to the abduction and imprisonment of many of its residents, especially young men and teenagers.