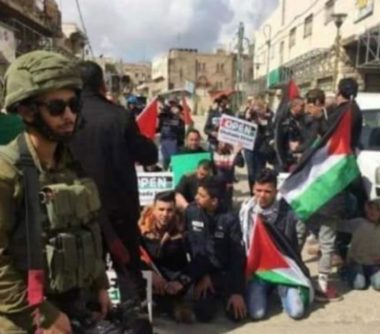 Israeli soldiers attacked, Friday, a nonviolent procession in the center of Hebron city, in the southern part of the occupied West Bank, marking the 25th anniversary of the Ibrahimi Mosque Massacre.

Media sources said the soldiers injured one child with the rubber-coated steel bullet, and caused many Palestinians to suffer the effects of teargas inhalation.

The protesters were also demanding the army to reopen the Shuhada Street, in the Old City, which has been closed since the massacre, and called for a complete Israeli withdrawal from the city.

They carried Palestinian flags, and chanted for the liberation of Palestine, in addition to condemning Israel’s illegal expulsion of the international observers of the Temporary International Presence in Hebron (TIPH).

On February 25, 1994, an American-Israeli physician identified as Baruch Goldstein, who resided in the ultra-fanatic Keryat Arba settlement in Hebron, walked into the mosque as a large number of Muslim Ramadan worshipers, mainly elderly, were praying and opened fire at random from his Israeli army-issued machine gun leading to the large number of deaths and injuries.

Immediately following the massacre, Israel decided to punish the victims by closing down the old town of Hebron, where the Ibrahimi mosque is located, for six months.

An all-Israeli committee was formed to probe the massacre, instead of punishing the settlers, to divide the mosque between Muslims and Jews, and to close down several commercial streets, most famously Shuhada Street, which remains closed for Palestinians until today.

Army checkpoints were also set up to restrict the movement of Palestinians, while Israeli settlers continued to move freely and without any restrictions.