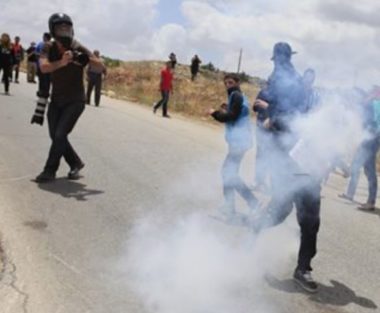 The protesters marched from the center of the village, and headed towards Abu Lemon area, near the Annexation Wall, which is isolating the Palestinians from their orchards.

The protesters started their nonviolent procession by carrying Palestinian flags, and chanting for unity, ongoing resistance, liberty, the release of all detainees and the Right of Return of the refugees.

They also marked the fourteenth anniversary of the ongoing nonviolent weekly processions, and called for ending the Israeli violations against the Palestinians, their homes and lands, and their holy sites, especially the escalating violation against the Al-Aqsa Mosque in occupied Jerusalem.

In related news, the soldiers attacked the weekly procession in the nearby village of Ni’lin, causing many to suffer the effects of teargas inhalation.

The protesters were also marking the fiftieth anniversary of the establishment of the Democratic Front for the Liberation of Palestine (DFLP).