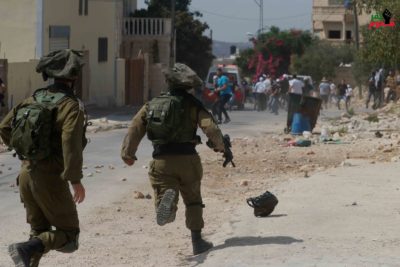 Israeli soldiers attacked, Friday, the weekly procession against the Annexation Wall and Colonies in Kufur Qaddoum town, east of the northern West Bank city of Qalqilia, and caused dozens to suffer the effects of teargas inhalation.

Morad Eshteiwi, the media coordinator of the Popular Committee against the Wall and Colonies in Kufur Qaddoum, said the Palestinians, accompanied by Israel and international peace activists, marched marking the 19th anniversary of the Al-Aqsa Intifada while chanting against the ongoing illegal Israeli occupation, its colonies, and ongoing violations.

Eshteiwi added that the soldiers tried to ambush the protesters in an abandoned home, but local youngsters discovered the hideout and started throwing stones at them.

Scores of Palestinians suffered the severe effects of teargas inhalation and received the needed treatment.

The army tried to chase and abduct Palestinian youngsters but was unable to do so.

Eshteiwi said that the Palestinians in Kufur Qaddoum will continue their legitimate nonviolent resistance against the illegal Israeli occupation, until achieving their internationally guaranteed rights of liberation and independence.