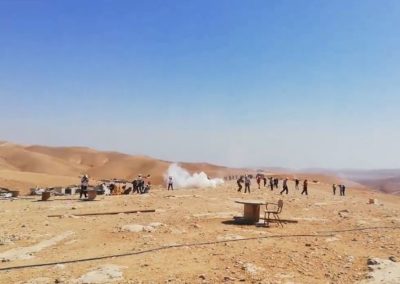 Israeli soldiers attacked, Friday, dozens of Palestinians holding prayers and a nonviolent gathering in the lands of as-Sawahra ash-Sharqiya village, east of occupied Jerusalem, to protest the illegal colonialist outpost which was installed on their lands in the ad-Dibba area.

Younis Ja’far, a member of the Local Council, said more than 100 Palestinians gathered on their lands and held Friday noon prayers, which were led by the Mufti, Sheikh Mohammad Hussein.

He added that the soldiers fired many gas bombs at the Palestinians, causing dozens to suffer the effects of teargas inhalation.

The Palestinians also marched in the area, carrying Palestinian flags and chanting against Israel’s illegal colonies, violations, and its ongoing occupation.

The soldiers prevented the Palestinians from marching close to the newly installed illegal outpost, and near the protest tent which was recently demolished and removed by the army.

Ja’far called on local and international institutions to support the struggle in the village and added that the annexation of this area means completing the isolating of the Palestinian communities and roads in the eastern area of occupied Jerusalem.

The demolished protest was installed two days ago by activists of the Colonization and Wall Resistance Commission near the illegal outpost which was installed by the colonists on September 15th, after they brought mobile homes and water tanks.