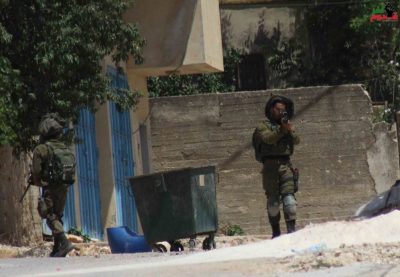 Israeli soldiers attacked, Friday, the weekly nonviolent procession against the Annexation Wall and Colonies in Kufur Qaddoum, east of the northern West Bank city of Qalqilia, and injured several Palestinians, in addition to an Israeli peace activist.

The soldiers attacked the protesters with rubber-coated steel bullets and gas bombs, shortly after the procession started, causing many to suffer the effects of teargas inhalation.

The soldiers also fired rubber-coated steel bullets, wounding an Israeli peace activist in his back, and chased many protesters in an attempt to abduct them.

Furthermore, the soldiers invaded homes, and occupied their rooftops, to use them as firing posts and monitoring towers.