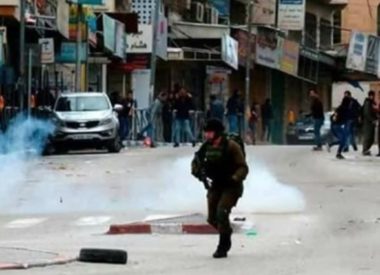 Israeli soldiers invaded, on Tuesday evening, the al-‘Arroub refugee camp, north of Hebron, in the southern part of the occupied West Bank, and shot one Palestinian.

Media sources said several army jeeps invaded the refugee camp, and resorted to the excessive use of force against Palestinian youngsters, protesting the invasion.

They added that the soldiers fired several live rounds, rubber-coated steel bullets and gas bombs at the protesters and surrounding areas.

One Palestinian was injured by fragments from live rounds in his arm and shoulder, before he was moved to the Al-Ahli Hospital in Hebron, suffering mild wounds, while several others were treated for the effects of teargas inhalation.