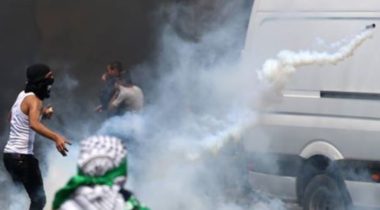 Israeli soldiers attacked, Friday, many Palestinian protesters at the northern entrance of al-Biereh city, in the central West Bank governorate of Ramallah and al-Biereh, causing many to suffer the effects of teargas inhalation.

The soldiers also chased many protesters, especially in the al-Baloa’ area in al-Biereh, in an attempt to abduct them.

In related news, the soldiers attacked the weekly nonviolent procession against the illegal Annexation Wall and Colonies, in Bil’in village, west of Ramallah, causing dozens to suffer the effects of teargas inhalation.

The soldiers also attacked the weekly procession against the Annexation Wall and Colonies, in Kufur Qaddoum village, east of the northern West Bank city of Qalqilia, and injured six protesters, including two journalists and one resident with special needs, in addition to abducting a French Peace activist.