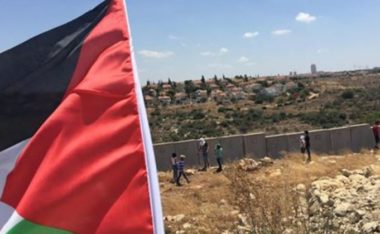 Dozens of Palestinians, accompanied by Israeli and international peace activists, held the weekly nonviolent procession against the Annexation Wall and Colonies, in Bil’in village, west of the central West Bank city of Ramallah, and commemorated the death of Bassem Abu Rahma, who was killed by the army in 2009, in addition to marking the Palestinian Prisoners’ Day.

The protesters held Friday prayers on Palestinian lands, south of the village, and marched while chanting for national unity, liberation, the release of all detainees, and establishing the independent, sovereign Palestinian State.

The soldiers resorted to the excessive use of force against the nonviolent protesters, and fired many rubber-coated steel bullets, gas bombs and concussion grenades.

Medical sources said several protesters suffered the effects of teargas inhalation, and one was shot with a rubber-coated steel bullet in his abdomen.

It is worth mentioning that Bassem Abu Rahma was killed at age 31, on April 7th, 2009, when an Israeli soldier shot him with a high-velocity teargas bomb directly in the chest.

His sister, Jawaher Abu Rahma, asphyxiated to death, on January 1st 2011, after the soldiers fired dozens of gas bombs at nonviolent protesters.

In July of 2008, their brother, Ashraf Abu Rahma, was detained by Israeli soldiers during a nonviolent protest in the nearby village of Ni’lin, and after he was handcuffed and blindfolded, a soldier standing next to him pointed his gun at his leg and shot him with a rubber-coated bullet.

In related news, the soldiers attacked the weekly nonviolent procession against the illegal Annexation Wall and Colonies, in Bil’in village, west of Ramallah, causing dozens to suffer the effects of teargas inhalation.

The soldiers also attacked the weekly procession against the Annexation Wall and Colonies, in Kufur Qaddoum village, east of the northern West Bank city of Qalqilia, and injured six protesters, including two journalists and one resident with special needs, in addition to abducting a French Peace activist.