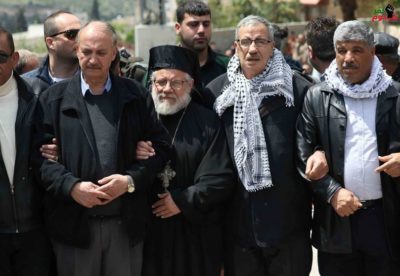 Israeli soldiers attacked, Friday, the weekly procession against the Annexation Wall and Colonies, in Kufur Qaddoum village, east of the northern West Bank city of Qalqilia, and injured six protesters, including two journalists and one resident with special needs, in addition to abducting a French Peace activist.

The procession this week marked the Palestinian Prisoners’ Day, and the thirty-first anniversary of the assassination of senior Fateh Khalil al-Wazir (Abu Jihad), who was killed by Israeli special forces in Tunisia.

Morad Eshteiwi, the coordinator of the Popular Resistance Committee in Kufur Qaddoum, said a large military force invaded the town, and attacked the protesters with rubber-coated steel bullets, gas bombs and concussion grenades.

The soldiers injured six persons, including two photojournalists, identified as Nidal Eshteyya of the Chinese Xinhua News Agency, and Ayman Nubani of the Palestinian News & Info Agency (WAFA), and a young man with special needs, who was shot with a rubber-coated steel bullet in the face.

Eshteyya added that the soldiers assaulted a French peace activist before abducting him, and chased dozens of protesters into the town, while firing a barrage of live rounds.

Among the persons who participated in the procession are Archimandrite Father Abdullah Yulio, a parish priest of the Melkite Greek Catholic church in Ramallah, in addition to the head of the Colonization & Wall Resistance Commission, Qadri Abu Bakr, Fateh Revolutionary Council member Abdul-Elah al-Ateera, the head of the Higher Follow-Up Committee of Detainees’ Affairs, Amin Shuman, in addition to many former political prisoners, leaders of Popular Resistance committees, along with many international and Israeli peace activists.

In related news, the soldiers attacked the weekly nonviolent procession against the illegal Annexation Wall and Colonies, in Bil’in village, west of the central West Bank city of Ramallah, causing dozens to suffer the effects of teargas inhalation.