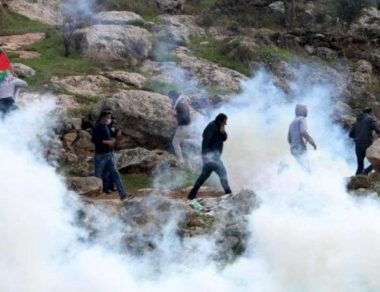 On Friday, Israeli soldiers injured several Palestinians during the weekly procession against the illegal colonies in Beit Dajan village, east of Nablus, in the northern part of the occupied West Bank.

The Palestinians marched chanting against the escalating Israeli violations and calling for liberation and independence before the soldiers fired several live rounds, rubber-coated steel bullets, and gas bombs.

Ahmad Jibril, the head of the Emergency Department at the Nablus office of the Palestinian Red Crescent Society (PRCS), said many Palestinians suffered the effects of tear gas inhalation and received the needed treatment.

The soldiers also attacked the weekly procession in Beita town, south of Nablus, and fired gas bombs and concussion grenades at them.