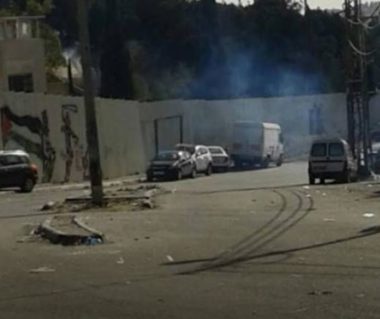 Several army jeeps invaded the village, and attacked many youngsters who protested the invasion, and fired many rubber-coated steel bullets and gas bombs at them, and at a number of homes.

It is worth mentioning that the village has been subject to constant invasions and violations, in an attempt to stop the protests against the illegal Annexation Wall and colonies, while the army also constantly distributes leaflets warning harsher measures against them if they do not stop.

Al-Walaja was approximately 17.000 Dunams, and was known for its fertile lands and rich water resources, including two artesian wells, and springs.

However, in 1948, after Israel was established in the historic land of Palestine, more than 3000 Palestinians were displaced from the village, and the Israeli authorities illegally confiscated large areas of its lands and demolished many homes while paving the way for the illegal Gilo colony.

Israel demolished many of its homes while dozens of homes are facing the same threat due to Israel’s illegal colonialist activities.