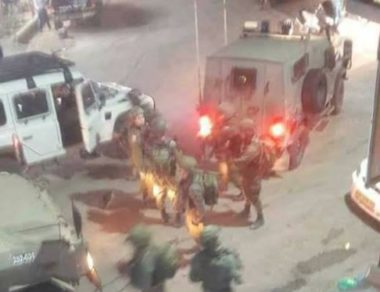 Israeli soldiers invaded, on Thursday at dawn, the town of al-Yamoun, west of the northern West Bank city of Jenin, and injured several Palestinians during ensuing protests.

Media sources said a large military force invaded the town at dawn, before the soldiers stormed and violently searched many homes, causing damage.

They added that the soldiers smashed the main doors of a few invaded homes, including those owned by the sons of the late Mohammad Saber Lubbadi, in addition to Abu Raqi Houshiyya, before storming them and conducting the violent searches.

The soldiers also interrogated many Palestinians in their own homes, while examining their ID cards.

The invasion led to protest in the town, and the soldiers fired several live rounds, gas bombs and concussion grenades at local youngsters, who hurled stones at the army jeeps, especially in the neighborhoods of al-Lubbadi and as-Saudi.

Several Palestinians suffered the effects of teargas inhalation, before receiving the needed treatment by local medics.