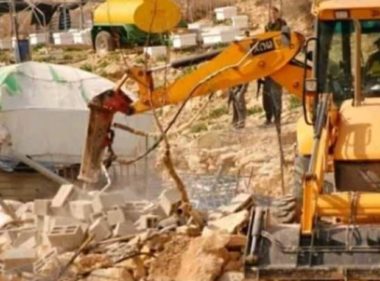 He added that the soldiers also demolished several livestock pens, owned by Jarrah Bani Odah, in the Ras al-Ahmar area.

The two areas are subject to frequent Israeli invasions, including the demolition of homes, structures, barns, and irrigation lines, in addition to the bulldozing of farmlands and grazing areas, amidst constant plans to build and expands Israel’s illegal colonies, built on Palestinian lands in direct violation of International Law, and for military purposes, including live-fire training.