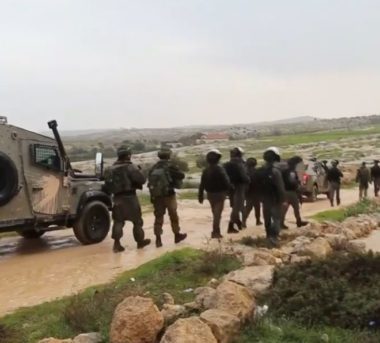 Local sources said a large military force invaded the al-Ras area, in the al-Mo’arrajat Bedouin community, before dismantling and confiscating two residential tents, and one tent that was used as a barn, and confiscated them.

They added that the dismantled and confiscated tents are owned by a local shepherd, identified as Eid Ahmad Fazza’.

The attack is part of constant violations against the Palestinians in the area, and the entire Jordan Valley of the occupied West Bank, in order to build and expand the illegal Israeli colonies, in direct violation of International Law and the Fourth Geneva Convention.

In related news, the soldiers invaded the al-Ras al-Ahmar and the al-Baq’a Bedouin communities, in northern Jordan Valley of the occupied West Bank, and demolished livestock pens in addition to seizing water lines.