Army Kills A Palestinian In Hebron 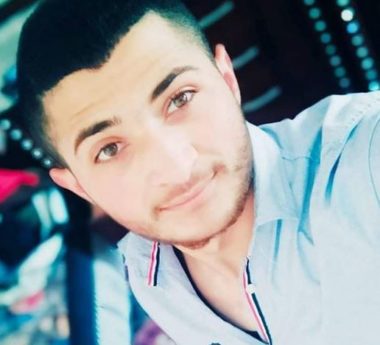 Israeli soldiers shot and killed, on Thursday afternoon, a young Palestinian man near Negohot illegal colony, southwest of Hebron, in the southern part of the occupied West Bank, reportedly after he rammed them with his car, wounding one.

The Palestinian Health Ministry said it was informed by the Civil District Coordination Office that the young man had been identified as Bahaeddin Mohammad Abdullah al-‘Awawda, 18, from Deir Samit town, west of Hebron.

The Palestinian was moved by an Israeli ambulance to Soroka hospital in Beersheba (Be’er as-Sabe’), but was shortly pronounced dead due to his severe wounds.

The Israeli army stated that the young man “deliberately rammed soldiers with his car, moderately wounding one,” before they shot him.

It added that the soldiers were standing near a military post when the Palestinian reportedly accelerated towards them, moderately wounding one soldier, 21, who suffered injuries in his upper body.

The incident took place near Beit Awwa town, west of Hebron, and the soldiers closed the main entrance of the town, preventing the Palestinians from entering or leaving it. The al-‘Awawda family demanded the army to reveal more information about his death, and called for a fair investigation committee to investigate these details.

His uncle, Atef al-Awawda, said that the family demands to know these details, regardless of whether this was a “ramming attack” as the army claims, or just a traffic accident, and most importantly “was there a real need for fatal shots?”

Atef added that the soldiers summoned the slain man’s father for interrogation immediately after the incident and that the father was still in the military base.