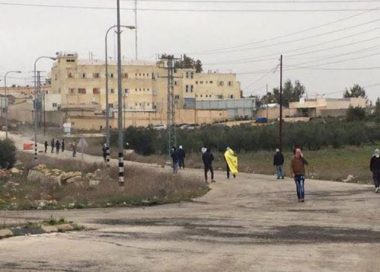 Palestinian medical sources have reported, Wednesday, that several Birzeit University students suffered the severe effects of teargas inhalation, near Bet El colony and security center, near Ramallah in the occupied West Bank, after the soldiers assaulted them while protesting the abduction of many students near Ofer Israeli prison a day earlier. The soldiers also abducted six students in another protest near Ramallah.

The sources said that the students, and some residents, suffered severe effects of teargas inhalation, near Beit El roadblock, close to the northern road of al-Biereh city.

The students were marching to protest the abduction of several students, who were taken prisoner by the soldiers, Tuesday, near the main gate of Ofer Israeli prison, during a procession in solidarity with the hunger striking Palestinian detainees.

Media sources in Ramallah said Palestinian security officers tried to prevent the students from protesting close to Beit El roadblock, but many managed to reach it, before the soldiers started firing gas bombs and rubber-coated metal bullets at them, while some protesters hurled stones and empty bottles.

Many Palestinians suffered the severe effects of teargas inhalation, and received the needed treatment by local medics.

In related news, the soldiers abducted six Birzeit University students, three males and three females, during a protest near Betunia roadblock, west of Ramallah, after the army alleged they were masked, and hurled stones on them.

In Bethlehem, the soldiers abducted a Palestinian child, identified as Issa Sameeh Hmeidan, at the main entrance of al-Khass village, east of Bethlehem.