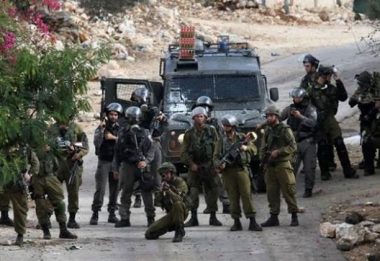 Israeli soldiers shot, on Tuesday at noon, three Palestinians, and abducted five others, after the army invaded many areas in Sa’ir town, and the al-‘Arroub refugee camp, in the southern West Bank governorate of Hebron.

Medical source said the soldiers shot three young Palestinian men with live fire in their legs, after many army jeeps invaded al-‘Arroub refugee camp, and attacked Palestinian protesters, and added that the three were rushed to a hospital in Hebron city.

The soldiers also invaded Sa’ir town, shot a young man with live fire, and prevented Palestinian medics from approaching him.

In addition, the soldiers abducted five Palestinians in the town; they have been identified as Abdullah Jaradat, Yasser Jaradat, Odai Jaradat, Qoteiba Jaradat and Mohammad Warasna.

Furthermore, the soldiers fired many concussion grenades and gas bombs at several homes, causing many Palestinians to suffer the effects of teargas inhalation.

In related news, the Palestinian Prisoners’ Society (PPS) has reported that Israeli soldiers abducted eight Palestinians, including siblings, after invading and ransacking their homes, in the West Bank governorates of Tulkarem, Salfit and Bethlehem.