Soldiers Injure Many Schoolchildren Near Jenin 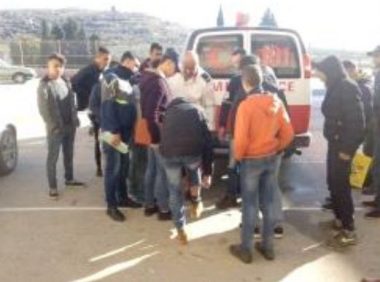 Palestinian medical sources have reported, Tuesday, that many schoolchildren suffered the severe effects of teargas inhalation, after dozens of soldiers invaded Ya’bad town, and stormed the school while firing gas bombs and rubber-coated steel bullets.

Media sources in Jenin said the soldiers fired many concussion grenades and gas bombs at the Ezzeddin Al-Qassam School, after invading its yard, while the students were behind their desks during the mid-term exams.

They added that dozens of children suffered the effects of teargas inhalation, while many others suffered anxiety attacks, before Red Crescent medics rushed to the school and provided them with the needed treatment.

Tareq Alawna, the head of the Education Department in Jenin, said the soldiers have been sporadically carrying out these provocative invasions and violations, and added that the soldiers shot and killed a student, identified as Fuad Turkman, during an invasion into the school seven years ago.

Alawna stated that the army deliberately targets the students, and the educational process, in different parts of the occupied West Bank.

It is worth mentioning that the soldiers are constantly deployed near the school, and conduct ongoing violations and provocative acts against the students.

Furthermore, the soldiers shot, on Tuesday at noon, three Palestinians, and abducted five others, after the army invaded many areas in Sa’ir town, and the al-‘Arroub refugee camp, in the southern West Bank.

On Tuesday at dawn, the soldiers abducted two Palestinians during violent military searches of homes, and summoned four Palestinians for interrogation, in Hebron governorate.

In related news, the Palestinian Prisoners’ Society (PPS) has reported that Israeli soldiers abducted eight Palestinians, including siblings, after invading and ransacking their homes, in the West Bank governorates of Tulkarem, Salfit and Bethlehem.