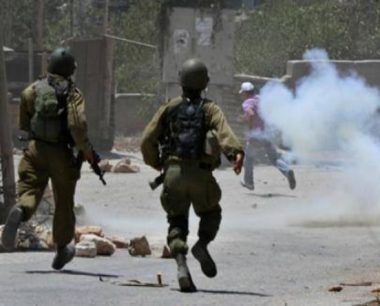 Israeli soldiers invaded, Monday, the village of Qusra, south of the northern West Bank city of Nablus, clashed with local youngsters, who hurled stones at the invading army jeeps, and injured twelve Palestinians, including two with live fire.

The Palestinian Red Crescent Society said the soldiers shot two young men with live fire, before they were moved to Rafidia governmental hospital, in Nablus, for treatment.

It added that the soldiers also shot four other Palestinians with rubber-coated steel bullets in their legs, while at least six others suffered the effects of teargas inhalation, and received the needed treatment without the need for hospitalization.

It is worth mentioning that the soldiers repeatedly invaded Qusra, Monday, especially after the Palestinians intercepted a group of extremist Israeli colonists, who invaded the eastern area of the town, where a young man, identified as Mahmoud Odeh, 46, was shot dead by settler’s fire, last Thursday, while the Palestinians were picking their olive trees.