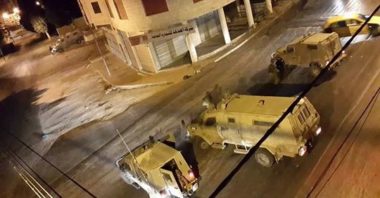 Dozens of Israeli soldiers accompanied many colonialist settlers’ buses into the northern West Bank city of Nablus, to visit a historic site, and invaded many neighborhoods in the city to remove the Palestinians from the streets, before clashing with dozens of youngsters, who hurled stones at them, while the soldiers fired live rounds, gas bombs, concussion grenades and rubber-coated steel bullets, wounding at least twenty Palestinians.

Media sources in Nablus said many army jeeps invaded Amman Street, and the areas surrounding Joseph’s Tomb, east of the city, and attacked dozens of protesters, wounding at least twenty.

The invasion was carried out by approximately 1000 settlers, in many buses, and dozens of soldiers in armored army vehicles.

They added that the soldiers fired a barrage of gas and concussion grenades at the protesters in addition to a number of homes and shops, causing fire in a shop for selling spare parts for vehicles.

The head of the Palestinian Red Crescent Society (PRCS) in Nablus, Ahmad Jibreel, said a young man suffered a fracture in the arm, while another young man was shot with live rounds in his leg, before the two were rushed to Rafidia Hospital.

He added that several Palestinians were shot with rubber-coated steel bullets, and fourteen others suffered the effects of teargas inhalation, and received the needed treatment by PRCS medics.

In related news, the soldiers stopped an ambulance transporting an elderly woman to a hospital, in the eastern part of Nablus, and forced the ambulance to turn around and look for alternate, longer roads.

Furthermore, the soldiers invaded the Dahia area in Nablus city, and Kafr Qalil town, east of the city, before invading the home of Yasser Afeef Amer, and searched the property, in addition to occupying its rooftop to use it as a monitoring post.

The army also abducted a young man, identified as Ahmad Anan Mansour, 19, from his home in the city, after invading and reaching it.

The Patriarch Joseph is revered by Jews, Muslims, Christians and Samaritans, but Israel only allows Jews into the shrine, as they believe the tomb to be his final resting place.

Palestinians generally hold that the tomb is the funerary monument to Sheikh Yousef Dweikat, a local religious and social figure.

In related news, the soldiers abducted two former political prisoners near Jenin, in northern West Bank, in addition to five Palestinians, including a legislator, in several parts of the West Bank.