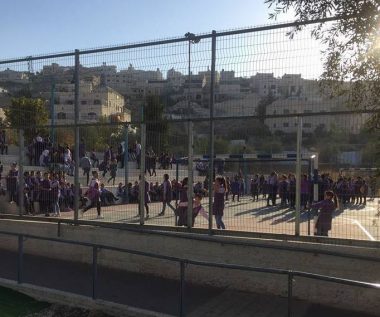 Israeli soldiers invaded, Monday, a Palestinian school in Beit Hanina neighborhood, north of occupied Jerusalem, abducted the principal along with three female teachers, and shut the school down.

The Union of Parents Committees in East Jerusalem Schools said many soldiers invaded Zahwat al-Quds School, in Beit Hanina, causing anxiety attacks among many children, and abducted the principal, Mona al-Karawi, and two teachers, before taking the three women to an interrogation center.

The school later announced receiving an order issue by the City Council, shutting the school down, and informing the families that they needed to transfer their children to other schools.

The school and the Union of Parents Committee called for a protest, on Tuesday morning, in the school, to condemn the invasion into the educational facility, and the abduction of the principal and the teachers.

In related news, the Palestinian Prisoners’ Society (PPS) has reported that Israeli soldiers have abducted, earlier Monday, at least twenty-one Palestinians in the occupied West Bank, during extensive and violent searches of homes, and one at the Erez Terminal, in northern Gaza.