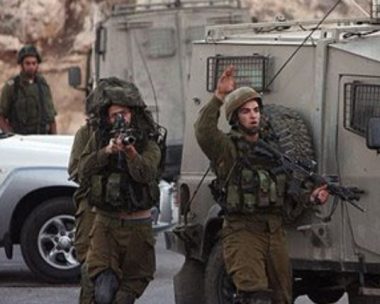 The Palestinian Prisoners’ Society (PPS) has reported that Israeli soldiers have abducted, earlier Monday, at least twenty-one Palestinians in the occupied West Bank, during extensive and violent searches of homes in the West Bank, and one of them was taken prisoners at the Erez Terminal, in northern Gaza.

The Bethlehem office of the PPS said the soldiers abducted Moayyad Ghassan Qaisi, 18, Samer Shibli al-Qaisi, 19, from the al-Azza refugee camp, north of the city, in addition to Zeid Taleb al-Badan, 24, from Teqoua’ town, east of Bethlehem, and Abdul-Rahman Shawqi Sheibat, 28, from Beit Sahour city, west of Bethlehem.

In Tulkarem, in northern West Bank, the soldiers also stormed and ransacked homes, and abducted four Palestinians, including a former political prisoner, and summoned several others for interrogation.

The soldiers also invaded al-Yamoun town, west of Jenin, broke into the homes of Hafeth Mahmoud Abahra and Ghassan Mohammad Abahra, before searching them while interrogating the families, in addition to using the rooftops of some homes as monitoring towers.

The invasions also targeted many villages and towns in Jenin, while the soldiers installed many roadblocks, in and around them.

In Shiokh town, north of Hebron, in southern West Bank, the soldiers invaded and violently searched the home of Adel Jarad Halayqa, and abducted his wife, Zeinat al-Mashni Halayqa, 50, and her brother, Ali Abed-Rabbo al-Mashni, 25, in addition to confiscating thousands of Shekels, two mobile phones, and many documents, including property deeps.

The soldiers invaded homes in the Hebron city, and the al-‘Arroub refugee camp, north of the Hebron, and abducted two Palestinians, identified as Mohammad Na’im Natsha, and Mos’ab Madhi.

Furthermore, the soldiers abducted a woman, identified as Huda Odah, from her home in Ein al-Louza neighborhood, in Silwan town, in occupied Jerusalem, and took her to al-Maskobiyya detention and interrogation facility.

Huda is the wife of detainee Mohammad Odah, who is serving nine life terms and forty years, after an Israeli court convicted him of involvement in a bombing which targeted a coffee shop in the Hebrew University in Jerusalem, in 2002, leading to the death of nine Israelis.

In addition, the soldiers abducted Khaldoun Abu Salim, at the Erez border terminal, in northern Gaza, although he carried an Israeli-issued permit to cross; the army did not provide any further info regarding his detention.

It is worth mentioning that the soldiers abducted, on Sunday at night, three Palestinians from Jerusalem, 19-20 years of age, after they reportedly tried to place an explosive near a section of the Annexation Wall, last week.