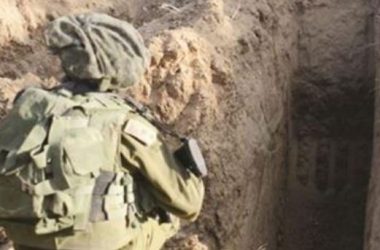 The Israeli army announced Sunday, that it intends to detonate what is left of a border tunnel, which it bombarded a week earlier, in Deir al-Balah in central Gaza, killing twelve Palestinian fighters, members of Al-Quds Brigades of the Islamic Jihad, and Al-Qassam Brigades of Hamas.

Israeli media sources have confirmed the army’s intention to detonate what is left of the tunnel, on the Israeli-controlled side of the border fence.

They added that dozens of soldiers have been deployed in the Eshkol Regional Council of Settlements, after the army bombarded the tunnel, killing the twelve fighters.

The military stated that the tunnel was not fully destroyed in the initial bombing, and that it intends to detonate what is left of it.

Responding to an appeal filed with the Israeli High Court by the Legal Center for Arab Minority Rights in Israel (Adalah), regarding allowing Palestinian rescue teams to search for the remains of Palestinians, buried under the rubble, the court said that “all Palestinians in the bombarded tunnel are dead,” and that the area is now closed, “under constant operations by the military.”

On Sunday at night, November 5th 2017, the Israeli army said it has unearthed and is now holding the bodies of five Palestinians who were killed when it destroyed a tunnel adjacent to the Israel-Gaza border. The families of the deceased maintain their right to demand the return of the bodies of their relatives for burial.

Following the Israeli announcement, Adalah and Al-Mezan Center for Human Rights (Gaza) moved to withdraw their petition with the Israeli Supreme Court.