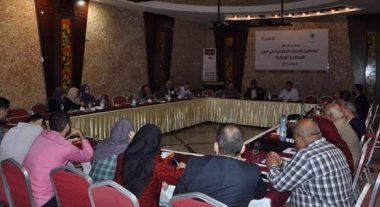 The meeting was held on 02 November 2017 in the Lighthouse Hall in Gaza City. The meeting concluded with several results and recommendations.

The most important of which was the need to include journalists in the reconciliation, ensuring the creation of a proper legal and political environment to unleash press freedoms, including the amendment of laws, correction of policies, and the need to unify the Journalists Syndicate to confront the risks and challenges facing journalists and media activists in the next stage.

The participants presented interventions about the reality and expectations regarding the media freedoms.

The meeting began with reviewing the two main themes of discussion: 1. the prominent obstacles facing journalists and media activists that prevent having free press that could practice its monitoring role; and 2. What we need for building better media and free press to play its role as a fourth authority capable of engaging in the social and cultural problems, to put forward facts, reveal corruption and raise awareness.

The participants also addressed the status of press freedom and violations against journalists in addition to the bad situation of media freedoms in view of the division.

They also talked about the importance of getting rid of the division’s outcomes and policies and unleashing media freedoms in the next stage.

Furthermore, the participants stressed the important role of freedom of opinion and expression in supporting democracy, freedoms and rights in general, emphasizing the Journalists Syndicate’s role in promoting and guaranteeing freedom of information.

They also stressed the role of the Journalists Syndicate in promoting and guaranteeing freedom of media.

Some participants emphasized the importance to unify the Syndicate and hold elections based on transparency and inclusiveness to guarantee the participation of all parties on an equal basis.

The attendance talked about the importance to develop the Syndicate and its means so it would be the guaranty for the protection of press freedoms.

The attendance also stressed the need for the Syndicate to enjoy independence when confronting the public authorities.

The attendance emphasized the importance to work on adopting the law of the right to information access. Moreover, the attendance highlighted the need to cancel the Cyber-crimes Law considered as the worst law, which imposed exaggerated and serious restrictions on the media freedoms.

The participants agreed on prioritize the cancellation of this law in the file of unleashing rights and freedoms, which is scheduled in the Palestinian reconciliation’s agenda.

The participants emphasized that media institutions should cooperate and form a lobby to practice pressure on the authority to respect the rights and public freedoms and the freedom of press, including the freedom of expression on social media, which has become the main target of the authorities.

The participants focused on the political participation of youth by practicing the freedom of expression, especially through the social media.

During the discussion, the young participants displayed an overview of the impact of the division on the youth’s role in political participation through the freedom of expression and how their role undermined as a result of the self-control policy practiced by the two parties to the division during the Palestinian division.

Furthermore, the young attendees called for necessarily involving them in the plans for a better media future and enabling them to practice the freedom of expression with different means without restrictions.

Results of the Panel Discussion:

The National Unity Government should prioritize the press freedoms, unleash the media freedoms and reopen the media institutions, which were closed due to the division.

It should be mentioned that this panel discussion is part of the campaign carried out by PCHR within its regular efforts to support the press freedom and funded by the Canadian Government within a project conducted by PCHR to protect the freedom of journalists and media activists.

“The designations employed and the representation of material in this publication do not imply the expression of any opinion whatsoever on the part of the Government of Canada.”