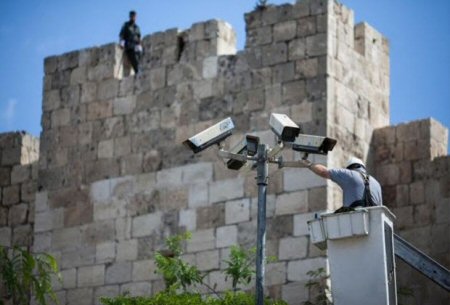 Israeli occupation police have begun placing new cameras at the Council Gate of Al-Aqsa Mosque, to monitor Palestinians’ entry and exit through the Islamic holy site.

Director of Al-Aqsa Academy for Science and Heritage Sheikh Najeh Bkeerat said, according to Days of Palestine, that Israeli police “are placing the cameras to monitor the movement in and out of Al-Aqsa Mosque and to restrict the movement of Jerusalemites, mainly in the Old City.”

Israeli Interior Minister Gilad Erdan said he was preparing a security plan to prevent “Palestinian attacks” in the Old City of occupied Jerusalem.

Sources said that the plan includes tightening the security fence in Damascus Gate and the Old City by setting up inspection points similar to military checkpoints.

Bkeerat said: “It is clear that the occupation prepared this plan after the defeat of the Israeli police and the Israeli Prime Minister Benjamin Netanyahu and after the Jerusalemites’ victory in the Al-Aqsa Battle,” in reference to Israeli decision in July to remove electronic detectors it installed at the doors of the holy site after large protests.

He added that the Israeli occupation started the implementation of its plan after expelling a number of Jerusalemites from the Old City, and after tightening its security grip on the area by setting up military barriers and inspection points.

He described this move as a new “dangerous Israeli attack,” which will usher in “worse” measures. He noted that this is an “announcement of war on Al-Aqsa Mosque, to divide it and try to force Jerusalemites out of the Old City and from around the holy site.” Since early Monday, a state of palpable tension has prevailed over the courtyards of al-Aqsa Mosque Compound, when an Israeli police member insulted Al Lah near the mosque’s Manuscript Centre.

This comes in conjunction with the intrusion of dozens of Israeli extremist settlers, who were guarded heavily by Israel’s special forces, into the courtyards of the mosque via the Maghariba gate.

The official of public relations and media department of Islamic endowments Firas Aldebs stated, according to Al Ray Palestinian Media Agency, that 49 extremist settlers stormed al-Aqsa Mosque this morning, and carried out provocative tours in its courtyards.

He pointed out that one of the settlers got down on the ground to perform Talmudic rituals near al-Rahma gate, east of the mosque.

Aldebs indicated that the setters received explanations on the alleged temple during the storming, noting that they were met by al-Aqsa guards.

The official added that Muslims worshipers and educational circle students defended the mosque by chants and Takbeer.

In the same context, some 15 members of Israeli intelligence broke into al-Aqsa Mosque and toured its chapels.

Israeli occupation police stationed at the gates of al-Aqsa Mosque Compound keeps imposing its strict measures on the entry of Muslim worshipers to the mosque, violating the right to freedom of religion.

It is worth mentioning that Al- Aqsa mosque is exposed, on a daily basis, to such intrusions, during which settlers perform Talmudic rituals and desecrate the sanctity of the mosque.

Israel seeks, through the unwelcome raids, to devote the temporal and spatial division of the mosque and to Judaize the occupied Palestinian city of Jerusalem.