Army Invades Many Homes Barta’a And Toura, Near Jenin 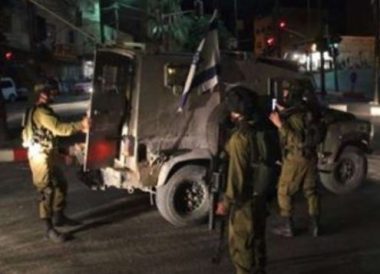 Dozens of Israeli soldiers invaded, on Saturday at dawn, many homes in Barta’a town, and Toura village, in the northern West Bank governorate of Jenin, violently searched homes, causing excessive damage, and interrogated many Palestinians.

Media sources in Jenin said a large military force invaded Barta’a town, before breaking into homes belonging to relatives of ‘Ala Rateb Kabaha, 26, who was mildly injured and abducted by the soldiers, Friday, after his car crashed into Israeli soldiers, leading to the death of two soldiers, and wounding two others.

The Israeli army is claiming that the accident was a “deliberate ramming attack,” and not a traffic accident.

The soldiers smashed the doors of the invaded homes, and conducted violent searches of the properties, in addition to interrogating the Palestinians.

Among the invaded homes are those owned by photojournalist Baha’ Ibrahim Kabaha, and his brothers Haitham, ‘Ala and Mohammad, in addition to Ahmad Nafe’ Kabaha, Monir Alaqma and Ahmad Ibrahim Ali.

Furthermore, the soldiers invaded Toura village, and stormed the home of a former political prisoner, identified as Ashraf Sami Kabaha, who was also detained and interrogated, before he was released on Saturday morning.

Also at dawn, the soldiers invaded ‘Azzoun town, east of the northern West Bank city of Qalqilia, and isolated a neighborhood before storming and violently searching ten homes.