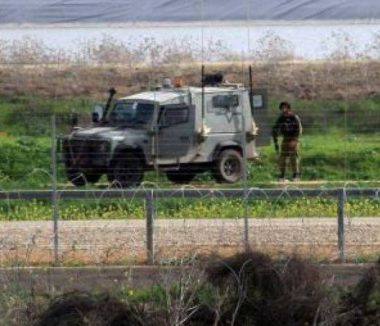 Israeli soldiers opened fire, on Saturday morning, at several Palestinian farmers, and shepherds, east Gaza, and in the al-Fakhari area, east of Khan Younis, in the southern part of the besieged coastal region, while Israeli navy ships fired dozens of live rounds and fishing boats, in the Sudaniyya Sea area, northwest of Gaza city.

The Palestinian New & Info Agency (WAFA) has reported that the soldiers, stationed in a military base across the border fence east of Gaza city, fire dozens of live rounds at Palestinian farmers, and shepherds, forcing them to run away in fear for their lives.

The soldiers also fired many live rounds at farmlands, and a few homes, in the al-Fakhari area, east of Khan Younis, in the southern part of the Gaza Strip.

The attack was carried out while many tanks and armored vehicles were seen roaming close to the border fence, and army drones hovered over the entire area.

In related news, Israeli navy ships fired many live rounds at fishing boats in Palestinian territorial water, in the Sudaniyya Sea area, northwest of Gaza city, causing damage to at least one boat, and forcing the fishermen back to the shore in fear of further escalation.

In the occupied West Bank, the soldiers invade the al-‘Obeyyat area, east of Bethlehem city, and summoned two former political prisoners, identified as Waleed al-Bustanji and Abdullah Suleiman Nawawra, for interrogation in Etzion military base and security center, north of Bethlehem.

In addition, dozens of Israeli soldiers invaded many homes in Barta’a town, and Toura village, in the northern West Bank governorate of Jenin, violently searched homes, causing excessive damage, and interrogated many Palestinians.

Also at dawn, the soldiers invaded ‘Azzoun town, east of the northern West Bank city of Qalqilia, and isolated a neighborhood before storming and violently searching ten homes.