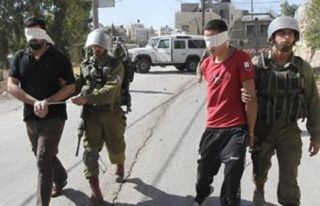 Israeli soldiers invaded, On Thursday at dawn, the towns of Sebastia and Iraq-Burin, in the northern West Bank district of Nablus, clashed with local youths and kidnapped two Palestinians, including a child.

Eyewitnesses in Sebastia town, north of Nablus, said many Israeli military vehicles invaded it and initiated searches of homes, leading to clashes between the soldiers and local youths, who hurled stones and empty bottles at the army.

The soldiers fired several live rounds, rubber-coated steel bullets and gas bombs, in addition to a number of flares, especially in the al-Bayader area, in Sebastia.

Also at dawn, the soldiers invaded several communities in different parts of the West Bank, and kidnapped eleven Palestinians, including six in Silwad town, near Ramallah.

Clashes also took place after the soldiers invaded the al-‘Arroub refugee camp, north of Hebron, in the southern  part of the West Bank.