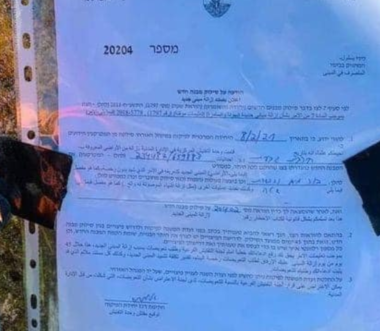 Israeli soldiers invaded, Tuesday, the town of Battir, west of Bethlehem in the occupied West Bank, and handed demolition orders targeting one home and a barn.

Resident Mohammad Issa Shouli said the soldiers invaded the Shurafa area near Aqabat Hasna and handed him orders for the demolition of his one-story 100 square/meter home.

He added that the soldiers handed another demolition order of a barn owned by his cousin Mohammad Ibrahim Ayesh.

It is worth mentioning that the area is subject to constant Israeli violations, including the demolition of homes and structures, amidst assaults by the illegal colonialist settlers targeting the Palestinian homes and structures, in addition to lands and even the livestock of the shepherds and farmers.

The violations also include restricting and barring the Palestinians from constructing homes and structures on their lands, while Israel continues the construction and expansion of the illegal colonies, in direct violation of International Law, the Fourth Geneva Convention, in addition to various United Nations and Security Council resolutions.