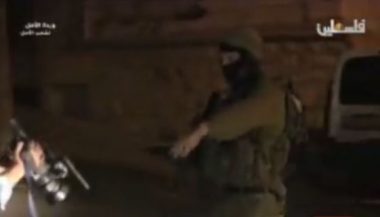 Israeli soldiers kidnapped, late at night and on Wednesday at dawn, at least twelve Palestinians in different parts of the occupied West Bank; the army said it located a weapon and bullets in Hebron.

Israeli army sources said the soldiers uncovered an M-16 automatic rifle, and two magazines, in Hebron city, in the southern part of the West Bank.

The army also kidnapped one Palestinian from Deir Abu Da’if village, east of the northern West Bank city of Jenin, and another Palestinian in Faqqou’a village, northwest of Jenin.

The soldiers also kidnapped two Palestinians in Kafr Malek village, east of Ramallah, four in the al-‘Arroub refugee camp, north of the southern West Bank city of Hebron, and one in Ethna town, west of Hebron.

Earlier on Wednesday, the soldiers invaded the al-Walaja town, west of the West Bank city of Bethlehem, and handed demolition orders targeting eight homes, and ordered a halt of the construction of one home.

In addition, the army kidnapped six Palestinians from the northern West Bank district of Nablus.