Shells Fired Across The Border Fence In Southern Gaza 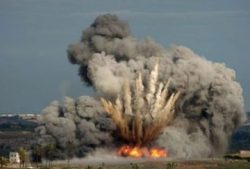 Israeli sources claimed the army responded to a mortar shell targeting army vehicles operating close to the border fence, and that the soldiers fired several shells at the source of fire.

The Al-Qassam Brigades of Hamas said the army fired two shells on one of its field units, and a monitoring tower, used by the fighters close to the border, east of Rafah, leading to property damage.

Also on Wednesday, the Israeli Radio said an explosive charge detonated near the border fence, causing no damage or injuries.