While Factions Call For De-escalation, Tension On Gaza Border Warns Of An Impending War 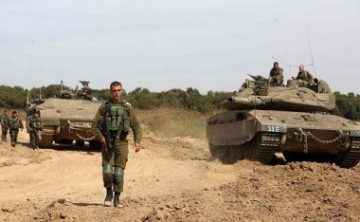 Various Palestinian factions, including Hamas and Fateh movements, have warned that the latest Israeli military escalation on Gaza, including the Wednesday bombardment of border areas in the southern part of the coastal region, could lead the area into a new full-fledged military escalation and war. Yet, while calling of de-escalation, Palestinian factions in Gaza say they will retaliate to further violations.

The factions, along with many political and military analysts, said the bombarded that targeted sites run by the armed resistance groups in Gaza, is a direct Israeli initiation of war, and a large military escalation.

They added that the current attempts to inflame the Gaza front comes while Israel continues and escalates its crimes against the Palestinians in the West Bank, including the field executions, and called on the International Community, especially the Egyptian mediator, to act now before the current escalation and violations turn into a war.

The Al-Qassam Brigades of Hamas said that the Israeli army bombarded one of its centers, east of the Sheja’eyya neighborhood, in Gaza, and another site east of Rafah, in the southern part of the coastal region, shortly after the army said an explosive charge detonated near a military vehicle, operating across the border fence.

Tension was also mounting across the border fence, including exchange of shells east of Gaza city, and around the Nahal Oz Israeli military base, in addition to areas east of Rafah.

The Israeli shells targeted two military towers, run by al-Qassam Brigades of Hamas and al-Quds Brigades of the Islamic Jihad, both east of the Sheja’eyya neighborhood, causing damage but no injuries. The shelling was seen as an attempt to drag both movements into a full military confrontation.

The army also fired shells targeting a military post of the Gaza’s Field Security Force, run by the Interior Ministry, and a monitoring post run by al-Qassam, east of Rafah.

The Al-Qassam Brigades issued a press release stating that “since Tuesday morning, May 03 2015, Israeli Engineering Corps advanced first 150-200 meters east of Rafah, and 300 meters into its northern and southern parts, and also advanced 200 meters east of Gaza city, before bulldozing and uprooting Palestinian lands – and they are still doing that.”

“We hereby want to make it clear that this is a direct violation of the ceasefire agreement of 2014; we will not allow this to continue,” Al-Qassam added, “The enemy must not make excuses and justifications, and must stop instantly – it needs to deal with its fears and insecurities somewhere else.”

The Israeli army said its fired the shells after military vehicles, operating across the border fence, east of Gaza city and in the southern part of the coastal region, were targeted with shells.

The official added that the resistance in Gaza will not allow Israel to present its daily invasions into border areas as a “new normal,” especially since these invasions and violations, including the attacks against Gaza fishers, are direct and serious violates of all ceasefire agreements.

He also said that the factions in Gaza are calling on Egypt to act immediately, before this tension turns into a new war.

Fayez Abu Aita, spokesperson of Fateh movement, said the Israeli escalation against Gaza is not a coincidence, as it comes parallel to the escalation, killings, daily invasions and abductions in the occupied West Bank.

“Israel is not interested in a peaceful solution; not interested in implementing what it agreed upon in all signed peace agreements,” Abu Aita said, “Whenever international countries try to pressure Tel Aviv into halting its violations, and resuming direct talks, it instantly resorts to military escalation.”

He warned that such an escalation on Gaza will lead to the death of innocent civilians, especially children, similar to what Israel did in its aggression of 2014, and demanded the International Community to act now, and provide the urgently needed protection to the Palestinian people, mainly in the impoverished, war-torn and besieged coastal region.

Member of the Political Bureau of the Democratic Front for the Liberation of Palestine (DFLP), Talal Abu Thareefa, said the current situation in Gaza, the siege, poverty and constant Israeli violations, in addition to the Israeli restrictions that are seriously slowing down the reconstruction of dozens of thousands of homes and buildings, bombarded by Israel in the aggression of 2014, and the high living coats amidst seriously high levels of unemployment, will just lead to more tension.

“Several armed resistance groups in Gaza have repeatedly said they are not interested in any military escalation and direct confrontation with Israel, and we don’t believe a war will take place soon,” Abu Thareefa said, “But armed factions in Gaza are sending messages to Israel, and the International Community, that they cannot remain idle while the army continues to invade, and continues its violations and escalation.”

He also said that the armed resistance groups, and all political factions, are calling for a speedy intervention, first by Arab countries and second by regional and international countries, to act fast and lift the siege on Gaza, and to speed the reconstruction in addition to obliging Israel to stop its daily violations, including the daily targeting of fishers in Palestinian territorial waters, and the targeting of farmers and workers in Palestinian lands, close to the border fence.

“We all know that such daily violations, constant attacks and escalation will just lead to a full explosion of this already fragile situation,” Abu Thareefa added, “Israel’s threats and military escalation are very serious, and they require all of us to end these internal divisions, achieve comprehensive unity, and come up with a unified national strategy.”

On his part, Mosheer al-Masri, a senior political leader of Hamas, warned that the current Israeli escalation is “testing the patience and readiness of armed factions in Gaza,” and added that this escalation is a very serious violation of the ceasefire agreement.

Mousa Abu Marzouq, also a senior political leader of Hamas, said that what is happening in Gaza’s eastern border is an Israeli attempt to force new facts on the ground, as the army wants to prevent the Palestinians from entering their lands near, and create this new buffer zone of 150 meters.

“This is why our courageous resistance fighters targeted the military vehicles and bulldozers, earlier today,” Abu Marzouq said, “Various factions then contacted Egypt, the ceasefire mediator and facilitator, to prevent further escalation and direct confrontation.”

Palestinian Political Analyst Mustafa Sawwaf told Maan that the resistance is still practicing a great deal of self-restraint, despite the repeated invasions and violations, but added “this does not mean that they will just accept the situation as it is.”

“This self-restraint will end if the Israeli violations continue” Sawwaf said, “Israel is trying to drag the resistance into a new war to appease its public, and to show them that the army has arms that can extend, and strike deep, in Gaza.”

Deputy head of the Political Bureau of Hamas Ismael Haniyya also warned that the continuation of the siege on Gaza, and the repeated invasions and violations, will just lead to further tension and escalation.

“Do not misread our patience in Gaza, we cannot accept that two million Palestinians remain under this deadly siege, under this intolerable suffering in this big prison,” Haniyya told thousands of Palestinians during a massive Hamas rally in Gaza, Wednesday.

In the 51-day Israeli aggression and onslaught on Gaza in the summer of 2014, the Israeli army killed more than 2200 Palestinians, and wounded more than 11000, mainly civilians, including entire families, children, infants and elderly, in addition to destroying dozens of thousands of homes, buildings, and destruction of infrastructure in the Gaza region.