Army Kidnaps A Father And His Son Near Ramallah 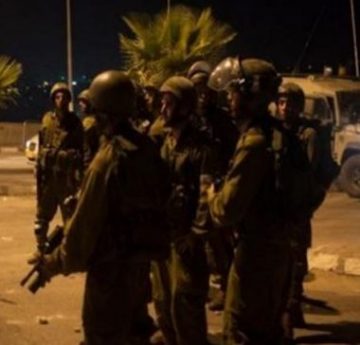 Israeli soldiers and uncover officers invaded, on Thursday at dawn, the town of Silwad, east of the central West Bank city of Ramallah, searched many homes and cars, and kidnapped a father and his son, who are also former political prisoners.

They added that the soldiers violently searched the property after detonating the front door, and interrogated the family before kidnapping the father and his son.

The family said that the soldiers also searched all cars in the neighborhood, including Abdul-Hadi’s car and confiscated it.

It added that female soldiers were among the invading forces, and took the women into a separate room, and searched them while interrogating them.

It is worth mentioning that Amin suffers with various chronic illnesses, and previously spent many years in Israeli prisons and detention centers, while his other son, Akram, is serving a 17-year prison sentence.

On Thursday morning, the soldiers opened fire on several Palestinian farmers, working on their own lands, east of Deir al-Balah, in central Gaza.