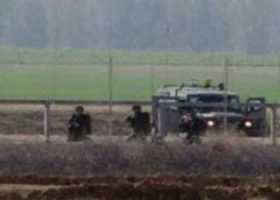 Israeli soldiers opened fire, on Thursday morning, on several Palestinian farmers, working on their own lands, east of Deir al-Balah, in central Gaza.

The farmers said the soldiers, stationed across the border fence, fired many live rounds, forcing them to leave their lands in fear of additional escalation and army fire.

The soldiers attacked the farmers while stationed on their military towers, across the border fence surrounding the Kissufim army base, southeast of Deir al-Balah.

The attack is part of frequent violations targeting Gaza farmers, working and fishers, in different parts of the besieged and impoverished coastal region.