Army Kidnaps A Palestinian Woman, Injures Another Woman And Scores Of Schoolchildren, In Jerusalem 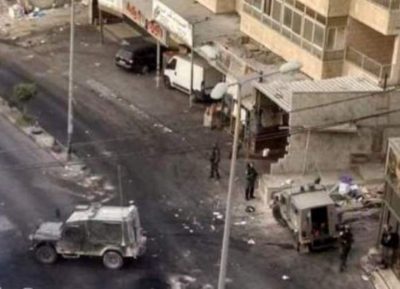 Dozens of Israeli soldiers invaded, on Wednesday morning, the town of al-Ram, north of occupied East Jerusalem, injured a Palestinian woman, and kidnapped another, in addition to wounding dozens of residents, especially schoolchildren.

The Palestinian News & Info Agency (WAFA) has reported that dozens of soldiers, riding various armored vehicles, invaded the town, and stormed the home of Misbah Abu Sbeih, who was killed by army fire Sunday, and occupied its rooftop, in addition to several nearby homes and rooftops.

The soldiers also fired many concussion grenades, gas bombs and rubber-coated steel bullets, at the residents who gathered near the invaded homes.

The army also clashed with schoolchildren, who were walking to their schools in the town, and injured many of them with rubber-coated steel bullets, while dozens suffered the effects of teargas inhalation.

Palestinian medics rushed to the area, but the soldiers prevented them from entering the town, after declaring it a closed military zone.

In addition, the soldiers assaulted a Palestinian man while walking to a store to buy bread for his children, causing various cuts and bruises. The soldiers also kidnapped a Palestinian woman, identified as Ghadeer Jamjoum, 35, on the main street of al-Ram, and took her to a detention and interrogation center in Jerusalem.

The town of ar-Ram has been witnessing ongoing clashes, amidst escalating military invasions, since the death of Abu Sbeih.