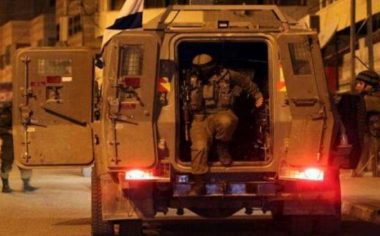 Israeli soldiers invaded, on Tuesday evening, the town of ar-Ram, north of occupied East Jerusalem, and shot four young men with live fire, during clashes that took place after the army stormed the eastern part of town.

Medical sources said four young men were shot with live fire, especially in the knee area, and were moved a local hospital.

The soldiers invaded various alleys and neighborhoods in the town and chased dozens of young men who clashed with them.

The soldiers also deliberately fired gas bombs on a number of homes, especially while retreating from the town.

Al-Ram has been subject to daily invasions, several times in the same day, since last Sunday’s death of Misbah Abu Sbeih, 39, from the town, who was killed by Israeli army fire after shooting to death an Israeli officer and a woman.

Also on Tuesday evening, the soldiers fatally shot a young Palestinian man, identified as Ali Atef Shiokhi, 20, in Silwan town, south of the Al-Aqsa Mosque in Jerusalem, after the army invaded the town, and clashed with many youngsters who hurled stones at their vehicles.