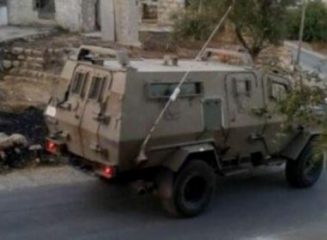 Israeli soldiers kidnapped, on Saturday at dawn, at least four Palestinians during invasions and searches of homes, in different parts of the southern West Bank district on Hebron.

The Hebron office of the Palestinian Prisoners Society (PPS) has reported that the soldiers invaded Kreisa area, in Hebron city, searched several homes, and kidnapped a young man identified as Ali Shehda Rajoub, 22.

Prior to abducting him, Israeli military helicopters deployed dozens of soldiers in surrounding mountains.

In addition, the soldiers kidnapped another young man, identified as Ezzeddin Talahma, after breaking into his home and searching it, in Doura town, southwest of Hebron.

Furthermore, the soldiers invaded Sa’ir town, northeast of Hebron, and kidnapped a Palestinian security officer, identified as Heeran Jaradat, after breaking into his home and searching it.

Heeran is the brother of Arif Sharif Jaradat, 22, who died on June 19th 2016, from serious wounds he suffered on May 4th, after Israeli soldiers shot him during an invasion of Sa’ir. The Palestinian suffered from Down’s Syndrome.