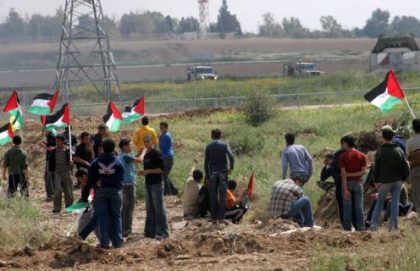 Israeli soldiers shot and injured, on Friday evening, six Palestinians with live fire after the army opened fire on protesters, east of the Sheja’eyya area, east of Gaza city, and east of the al-Boreij refugee camp, in central Gaza.

Media sources in Gaza said the soldiers, stationed in Nahal Oz military base, across the border fence, east of the Sheja’eyya, fired many live rounds on Palestinian protesters who marched towards the security fence.

Two Palestinians were shot with live rounds in their legs, before Red Crescent medics moved them to the Shifa Hospital, east of Gaza.

Their injuries have been described as moderate; several others suffered the effects of tear gas inhalation.

In addition, four Palestinians were shot also by live army fire, east of the al-Boreij refugee camp, and were moved to the Al-Aqsa Hospital, suffering moderate wounds.

The Israeli army repeatedly opens fire on Palestinians who approach the border area, even without getting very close to it, and frequently attacks farmers in their own lands.

In related news, a Palestinian woman was injured, on Friday at night, after a number of Israeli fanatics assaulted her in Wadi Qana area, near Salfit city, in the occupied West Bank.

The woman suffered cuts in her arms, while many cars sustained damage after the several Israeli consists hurled stones on them.