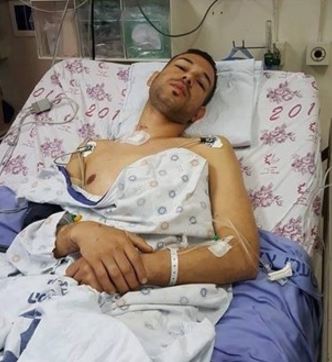 Yahya Hisham Hijazi, 24, from Shu’fat refugee camp in occupied Jerusalem, who was injured by nine Israeli army bullets, became the latest victim of Israel’s security obsession and paranoia, under allegations that became known to the Palestinians, claims of “carrying a knife,” that continue to be used as a direction justification of the military’s open fire orders. The military later admitted Hijazi did not attempt to attack its soldiers.

The Israeli army first claimed that the Palestinian carried a knife and ran towards the soldiers, before they opened fire and shot him with nine rounds in his one of his legs, also causing fractures in his other leg.

However, the army later admitted that an investigation into the incident revealed that the young man was “accidentally shot by its soldiers.” The incident took place in Shu’fat refugee camp, in occupied Jerusalem.

Hashem Hijazi, the father of the wounded young man, said the soldiers interrogated his son in his hospital room for more than three hours, although he underwent two surgeries in his legs at an Israeli hospital.

The soldiers shot Hijazi on yesterday (Thursday, July 14th, 2016) while he was heading to his work in West Jerusalem.

Hijazi saw several Palestinians engaging in a scuffle, while one of them, who is a known drug addict, was carrying an axe and a knife. During the scuffle, undercover Israeli army forces invaded the refugee camp, apparently to conduct arrests, and fired many live rounds at Yahya while he was trying to remove the knife from the hand of the drug addict.

The soldiers initially claimed that they shot the Palestinian because “he carried a knife and ran towards them.”

“My son raised his arms in the air to tell the soldier that he does not have any intention to attack them,” the father said, “But they didn’t care, and opened fire on him.”

His mother said the doctors removed nine bullets from one of her son’s legs, and also operated on his other leg because he suffered fractures when the soldiers repeatedly beat and kicked him after shooting him.

She added that, after the soldiers moved her son to Shaare Tzedek hospital, they refused to allow his family to see him, and kept him held under strict guard for more than 24 hours, before they made the decision to ‘release him.’

The family said it intends to sue the soldiers who opened fire on their son, and repeatedly assaulted him despite his wounds.