Army Kidnaps Five Palestinians In Jerusalem, Two In Nablus And Two In Hebron 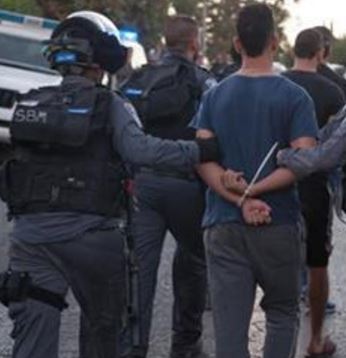 Israeli soldiers kidnapped, on Sunday at dawn, five Palestinians, including three children, in different parts of occupied East Jerusalem, and caused several Palestinians to suffer the effects of teargas inhalation in Silwan. The army also kidnapped two Palestinians in Nablus, and two in Hebron.

Abu ‘Assab added that the soldiers also invaded the at-Tour village, kidnapped a child, identified as Mohammad Rabay’a, and a young man identified as Mahmoud Shaweesh.

Barbar, from Silwan, is a former political prisoner who spent nine consecutive years in Israeli prisons and detention centers.

On Sunday morning, the army kidnapped two school students near the Ibrahimi Mosque, in the center of Hebron city, in the southern part of the West Bank.

The soldiers stopped and searched the two students, at a military roadblock, and claimed to locate a knife in one of their bags.

On Saturday at night, the soldiers invaded the at-Tour area, in Jerusalem, and clashes with many locals, who hurled stones and empty bottles at the army vehicles, while the soldiers fired several live rounds and rubber-coated steel bullets.

In Silwan town, the army invaded the al-Louza neighborhood, and fired dozens of gas bombs, causing many Palestinians to suffer the effects of teargas inhalation.

The army claimed the invasion was carried out after a number of Palestinians hurled stones on settlers’ cars.