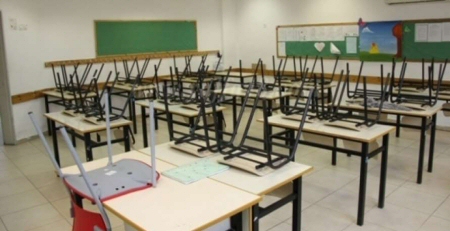 An open-ended strike continues in a number of schools in the villages and towns of the pre-1948 occupied territories, in protest of poor infrastructure and logistics.

The village of Shaqib Al-Salam, in the Negev, witnessed a strike at all schools, in solidarity with Al-Zahraa school, which initially staged the strike in protest of bad conditions.

In addition, the central committee of parents in Tira announced an indefinite strike at all the city’s schools because of a dispute with the Ministry of Education on the identity of the educational network that will manage the secondary schools.

According to Israeli public radio, a meeting will be held on Sunday between the general director of the ministry, Michal Cohen, and between the representatives of Tira and the Committee of parents, to discuss this issue.

Al Ray further notes that the schools in the occupied territories of 1948 suffer from the crisis in several aspects, highlighted by the overcrowding and poor infrastructure, due to the negligence of the governments that prevent the adoption of a budget for years.