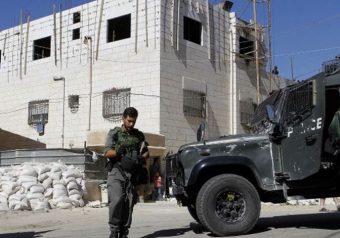 Israeli soldiers invaded, on Sunday at dawn, the southern West Bank city of Hebron, kidnapped two siblings and renewed a military order closing their family home, in the southern area of the city.

The WAFA Palestinian News Agency has reported that the soldiers kidnapped Emad Aref Jaber, and his brother Anas, and renewed a military order to keep the home closed.

The Jaber family home was declared shut under direct military orders when the Israeli army invaded it, and ordered the family to stop construction work in the property, after Israeli colonists complained against them.

The soldiers assaulted the two siblings, and fired many concussion grenades at many Palestinians who gathered in the area.

The Israeli army informed the family that their property is located in a “closed military zone,” therefore they cannot build, or expand.

The family is building a second floor, but the settlers, illegally living in  the area, filed a complaint to the military.

Last Friday, the army ordered the family to stop the construction work.

In related news, the soldiers invaded the Shiokh and Sa’ir towns, before invading the home of Fadi al-Froukh, 27, who was killed by the army in early November of last year. The soldiers searched the property and illegally confiscated the family vehicle.

The soldiers searched the property and illegally confiscated the family vehicle.

In addition, the army installed many roads in the Hebron district, especially on Be’er as-Sabe’ Street, Haggai Junction, al-Fawwar Junction and the main entrance of the ath-Thaheriyya town, before stopping and searching dozens of cars, and interrogated many Palestinians while inspecting their ID cards.