Army Kidnaps One Palestinian Near Tulkarem 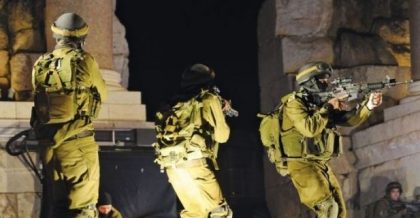 The Tulkarem office of the Palestinian Prisoners Society (PPS) has reported that dozens of soldiers invaded, on Wednesday at dawn, the town of Bal’a, near Tulkarem city, in the northern part of the West Bank, and kidnapped one Palestinian.

The PPS said the soldiers invaded the home of Othman Rajeh Suleiman, after forcing him and his family out of their property, and kidnapped his son, Aseed.

Suleiman said the soldiers confiscated computers and mobile phones, owned by the family, in addition to deliberately causing damage to electric equipment, and furniture, before leaving the property.

Also on Wednesday at dawn, hundreds of soldiers invaded the town of Silwan, in occupied East Jerusalem, before storming and violently searched dozens of homes and kidnapped 33 Palestinians. The soldiers also kidnapped one Palestinian in Sheikh Jarrah.