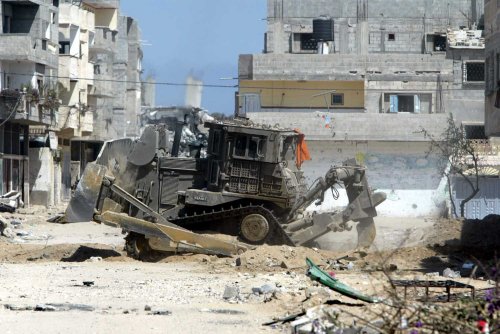 On Tuesday, Israeli soldiers driving Caterpillar D9 armored bulldozers and other armored vehicles entered the town of Qalandia and began demolishing Palestinian homes. A group of townspeople quickly organized a blockade, surrounding the homes with their bodies, but they were violently assaulted by the Israeli soldiers.

Local sources report that when the Israeli troops rolled into town, blockades were formed almost immediately in front of the targeted homes. Israeli troops then attacked the Palestinian residents with tear gas, rubber-coated steel bullets, sponge bullets and concussion grenades. Seven local residents were injured as a result.

According to the Wafa News agency, among those assaulted was the head of the Qalandia village council, Youssef Awadallah, who was taken to a hospital for treatment.

According to the most recent United Nations OCHA report on home demolitions by Israeli forces, “There was a sharp increase in Palestinian-owned structures destroyed, dismantled or confiscated by the Israeli authorities in the West Bank during the first two months of 2016: At least 320 structures, including 88 homes, were destroyed. February 2016 stands out as having the highest number of structures demolished in a single month since OCHA began the documentation of demolitions systematically in 2009.”

In a recent report on counterpunch.org, journalist Richard Hardigan reported, “OCHA reports that during the years 2012-2015, an average of 50 homes were demolished in the West Bank, Gaza and East Jerusalem every month. So far this year, the army has destroyed 539 structures, a rate that is more than three times higher. In all of 2015, 453 buildings were demolished, so the sharp surge in this kind of activity is an extremely recent phenomenon. The reasons for this sudden increase are unclear…One thing that is clear is that the Israelis are getting impatient.

“There are currently 11,000 buildings in Area C that have been slated for demolition but as of now are still standing. Recently Major-General Yoav Mordechai, the coordinator of the government’s activities in the West Bank, appeared before a subcommittee in the Israeli parliament to answer questions about the slow pace of demolitions, and he claimed that he was doing all he could. Some right-wing members of the government had accused him of unfairly singling out structures in the illegal Israeli settlements in the West Bank, but he quickly dispelled this notion.”

Hardigan quoted the Israeli Major-General of assuring the parliamentary audience, “I want to state unequivocally that enforcement is more severe towards the Palestinians”.