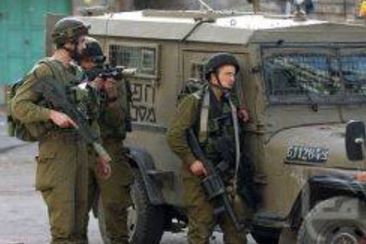 The soldiers invaded Beit Awwa town, southwest of Hebron, and kidnapped Ziad Abu Kreisa Sweity, after searching his home, and several nearby homes.

The Hebron office of the Palestinian Prisoners Society (PPS) has reported that the soldiers also invaded the al-Fawwar refugee camp, south of Hebron, and kidnapped Ali Mohammad Ahmad Sarahna, after confiscating his car.

The PPS added that the soldiers also invaded Dour and Bani Neim towns, in addition to Kharsa village, near Hebron, and violently searched many homes, causing excessive damage.

The army installed two roadblocks on the main roads leading to Farsh al-Hawa area, west of Hebron, and al-Fahs area, south of the city, before searching dozens of cars while inspecting the ID cards of many passengers, and interrogated many of them.

It is worth mentioning that Hebron’s northern entrance, Jouret Bahlas, remained closed with concrete blocks, sand hills and an iron gate.

Rateb al-Jabour, the coordinator of the Popular and National Committee against the Wall and Colonies in southern Hebron, said the soldiers also held dozens of Palestinians at the main entrance of the at-Tiwani village and interrogated many of them.